A Martha Stewart Guest Blog from Ari Katz on His Gardens

Last year, I created a kennel on my family’s farm in Maryland and have started seriously breeding Labrador Retrievers. My history with the breed dates back to the age of 10 when I showed my first Labrador, Maggie. In November of 2020, I decided to breed my female, Mehndi, a dog I co-own with my friend, Karen Helmers. Mehndi was the right age and was mature enough for her first litter. 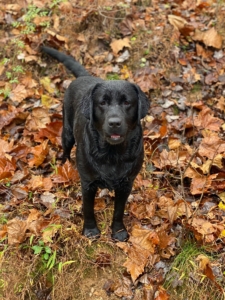 This is Mehndi, CH Paradocs Mehndi. She is three years old and is halfway done with her AKC Grand Championship, meaning she has earned half the necessary conformation show points necessary to get this title. Mehndi is a beautiful example of a Labrador. She looks and moves great and has a wonderful personality – kind, outgoing, and relaxed. She is also cleared of any orthopedic abnormalities – something that is very important to check when breeding. We decided that our friend Fabian Negron’s dog, Memo, would be a good match for Mehndi and would allow us to continue the improvement of the breed of Labradors. 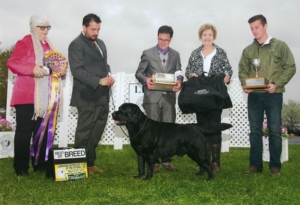 This is Memo, MBISS GChB Lakeside Memoir of Gallivant. Memo has won Best of Breed at the Westminster Kennel Club Dog Show twice as well as Best in Specialty Show at the world’s largest single-breed dog show, The Labrador Retriever Club of the Potomac, in 2019. 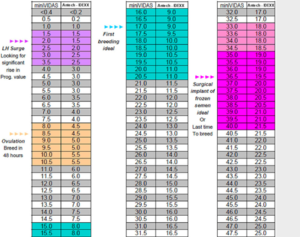 Contrary to popular belief, breeding dogs is far more scientific and data-based than just “breeding them.” This table shows how closely a female’s levels are monitored before breeding. Reputable breeders take this process very seriously – and only breed for the betterment of the line. (Photo courtesy of ASHVET) 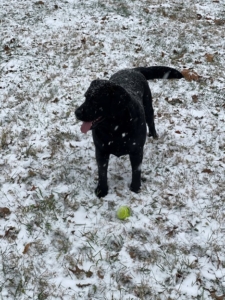 28 days post first breeding, I took Mehndi to my vet, Dr. Stephen Stang, DVM, owner of Loudoun Veterinary Service Inc., for an ultrasound to see if she was pregnant. Mehndi’s ultrasound showed at least six puppies. The gestation period normally ranges an average of 63 days. Dr. Stang has been my vet for years and I trust him immensely. He and I calculated Mehndi’s due-date for the first week of February. 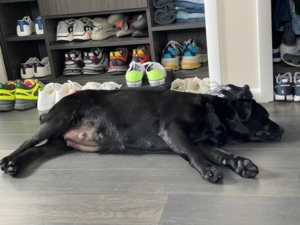 On January 30th, Mehndi was brought inside my house from the kennel. I bring the expectant mother indoors a week or two before the whelp date to monitor them more closely, let them become comfortable inside my home, and to prepare for having puppies. I take their temperatures twice a day starting a week before the due date. Any significant temperature drop means that the puppies are on their way and that I need to contact Dr. Stang to arrange for a cesarian section. Here, you can see how large Mehndi became. 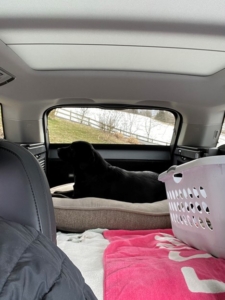 Here is Mehndi in my car getting driven to Dr. Stang’s office for her c-section. The laundry baskets were taken to hold the puppies on the way back home. 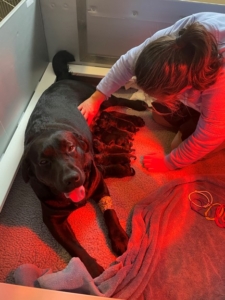 Here is Mehndi, her six new puppies, and Carmen later that day. Mehndi had five girls and one boy – all very healthy and strong. Carmen was thrilled to meet the new puppies and was excited to begin taking care of them. Because I am a full-time student, I need help during the first two weeks to make sure the puppies and their mother are doing well. Karen, Carmen, my parents, and I were all very impressed with how good a mother Mehndi was to her puppies. This was her first litter and she did everything perfectly. 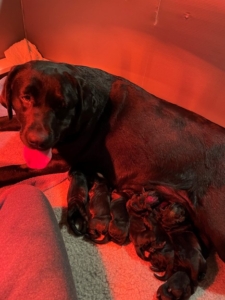 Here is another beautiful picture of Mehndi and her puppies just hours after they were born. Because all the puppies look very similar until they open their eyes, I mark their heads with different colored nail polish to keep careful records of each puppy, their weight, and their strength. The red “glow” is from a heat lamp that hangs over the whelping box to keep the puppies warm while they sleep. 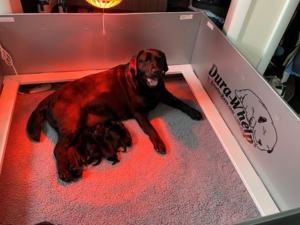 Here are the puppies and Mehndi three days post-birth. The puppies had grown significantly. 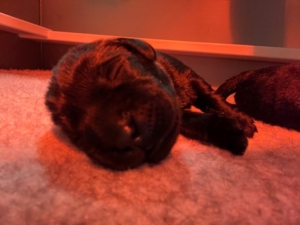 This is a very cute picture of “Pink” sleeping. Puppies do not begin to open their eyes until about 14 days of age. 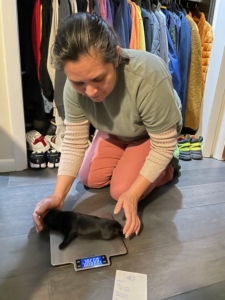 Carmen and I weigh each puppy to make sure they are gaining the correct amounts of weight. After the first 48 hours, puppies should gain about 10 to 15 percent of their birth weights every day. It is very important to keep track of each puppy and their progress. 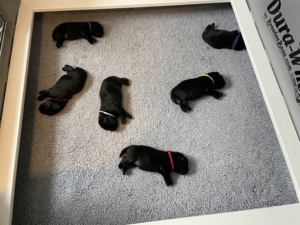 This is one of my favorite pictures from Mehndi’s litter. Each puppy is sound asleep. At about two weeks of age, I put on colored collars to quickly identify each puppy. These collars were made by my friend, Tina Jewett. She makes and sells these collars. They are light, simple, and effective. 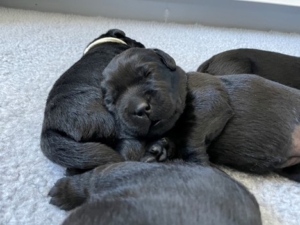 At 12 days, the puppies had gotten much bigger and were just starting to open their eyes. Puppies love sleeping on one another. They find it comforting and enjoy the warmth from their littermates. 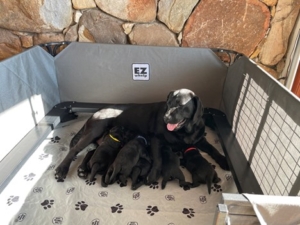 At day 15, I moved the puppies into this EZwhelp Box in my living room. This box is very stable, easy to put together, easy to clean and wash, and the mothers can get in and out easily. Additionally, the puppies can see through the vinyl lining. I am sure Martha would say, “it’s a good thing.” 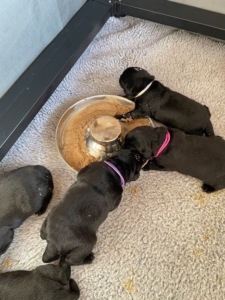 This is the puppies’ first real meal. American Natural Premium makes a “Breeder and Puppy Starter” that I begin offering at about two-and-a-half weeks. 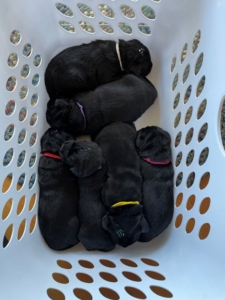 Until they no longer fit, we put the puppies in laundry baskets when it’s time to clean their bedding. Puppies are incredibly labor intensive. Aside from requiring 24/7 attention for their first two weeks, puppies also need to be cleaned at least three times a day. My puppies’ bedding is changed whenever it begins to smell or get soiled. I take great pride in keeping my animals healthy and robust – as do Carmen and Lorenzo, who help me greatly in the care of my dogs and other animals. 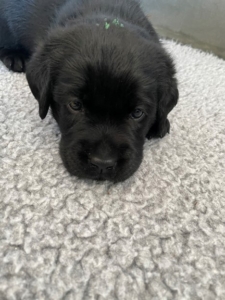 This adorable girl is “Yellow.” In this picture she is 28 days old. 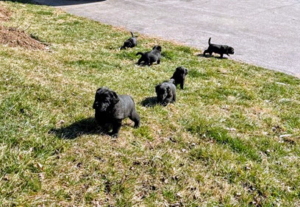 This photo shows the first time my puppies went outside. The weather was nice and by this stage, they were ready to explore. Each puppy had a different reaction that aligns with their personality. “Yellow,” who is very brave and outgoing, was thrilled whereas “Red” was shy and cautious. 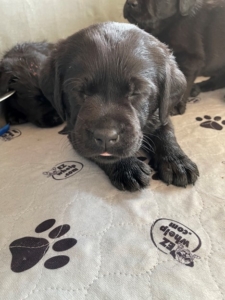 This is “Pink,” a girl, making an adorable face. Seeing my puppies grow brings me so much joy. I can’t wait to see who I wind up keeping. 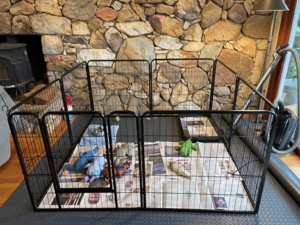 At five weeks, the puppies outgrew their whelping box and were moved into this X-Pen. Because the puppies still need to be heavily monitored, they remain in my living room where they can be heard and watched throughout the day and night. 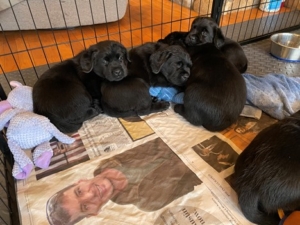 On this day, after breakfast, the puppies took a long nap. As it turns out, being a puppy is a lot of work! 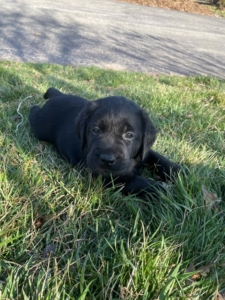 This is the one boy of the litter. He wears a white collar. Here he is lying down outside on a warm afternoon.

It is very fun getting to know each puppy’s personality. “Yellow” is very brave and outgoing. She loves exploring outdoors and running underneath things to hide and playfully attack her siblings. 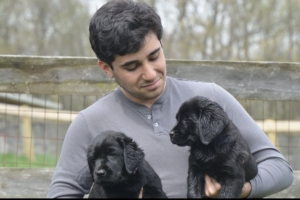 Here I am with my two “keepers” from the litter, “Blue” and “Purple” – both girls. I have decided to name one Fara and the other India. 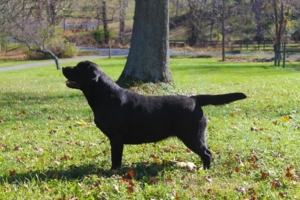 Aside from Mehndi and her litter, my other dogs have been doing quite well. My girl Kima finished her championship with the help of my friend, handler Julie Romeo. Now, Kima is officially an AKC Champion. Thank you Julie for working so hard with Kima and turning her into a champion! 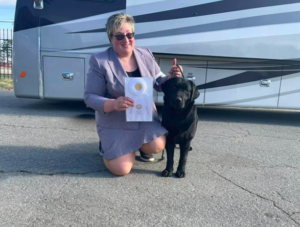 Julie also finished one of Karen’s dogs, Millie, CH Paradocs Vermillion. Not only did Millie finish her championship, but she also won a Sporting Group 4 placement, which is great. Congratulations to Karen, Julie, and Millie. 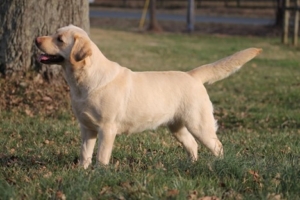 This is Jacqueline. A few weeks after Mehndi was bred, I bred Jacquie to a very special dog bred and owned by Karen. I was thrilled and am hoping for a litter as successful as Mehndi’s – one with healthy, strong puppies and good mothering.

This is a new, smaller kennel I installed in my barn, across the aisle from the already existing kennel. This kennel offers two 10 by 12 foot and two 5 by 6 foot pens. In this photo, the cement is still drying.

This picture was taken of me and Truman a few weeks ago. During the time of COVID, I have thoroughly enjoyed being able to work with and breed my dogs and create such a beautiful kennel. I am looking forward to improving the breed even more in years to come. Please visit my web site www.aklabradors.com for more information.