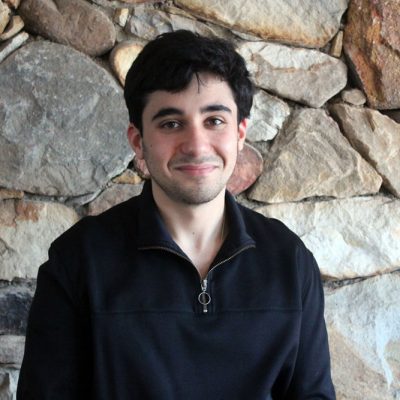 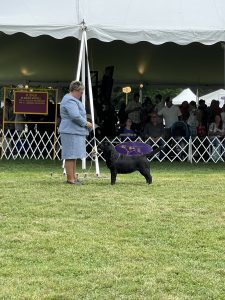 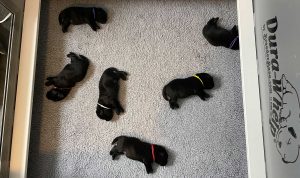 Established in 1877, The Westminster Kennel Club is America’s oldest organization dedicated to the sport of purebred dogs.

This year, the club’s annual show expanded to three-days to accommodate the more than 2600 dogs that competed for “Best in Show.” Dogs are exhibited in seven different groups, organized by the original work that each breed was developed to do. The seven groups include Herding, Sporting, Non-Sporting, Working, Hounds, Terriers, and Toy breeds. I attended the show on the third day of competition designated for Sporting and Working breeds. 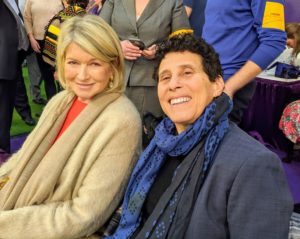 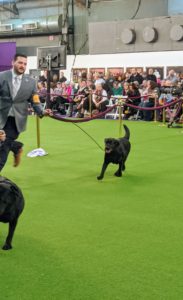 Here’s Safari going around the ring. The purpose of breed conformation shows is to evaluate breeding stock. Judges select winners based on their ability to contribute and improve the next generation of dogs. Safari is an excellent example of what a true Labrador Retriever.

The judge takes a look at Safari’s teeth and bite.

The judge also looks at bone structure and stance. The judge compares each dog against the parameters of the idealized version of its breed or the standard. 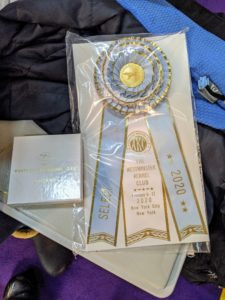 With so many Labrador Retrievers competing, it took two hours before the winners were chosen – there was such suspense! Safari took Select. Select Dog and Select Bitch are Champions that are recognized as top quality of their sex after Best of Breed and Best of Opposite are awarded. Congratulations, Safari! 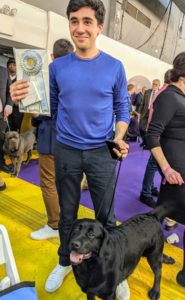 We’re so proud of Ari and Safari.

Afterward, Ari and Safari posed for a photo with handlers Fabian Negro and Tom Flaherty – and Memo, the Labrador Retriever that won Best of Breed. 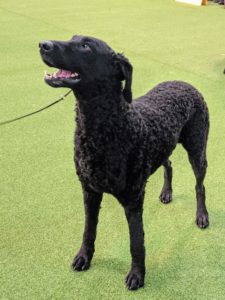 The Curly-Coated Retriever was originally bred in England for upland bird and waterfowl hunting. It is the tallest of the retrievers and is easily distinguishable by the mass of tight curls covering its body. 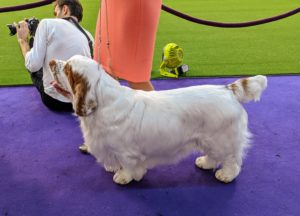 The Clumber Spaniel is the largest of the spaniels, and comes in predominantly white with either lemon or orange markings. 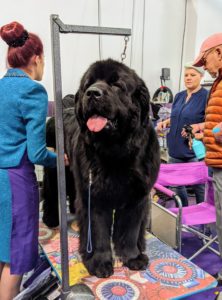 The Newfoundland dog can be either black, brown, or white-and-black. The massive Newfoundland is a powerful working dog of heavy bone, but also sweet-tempered and great with children. 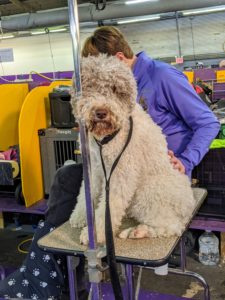 The Lagotto Romagnolo is a breed of dog from the Romagna sub-region of Italy. The name derives from Romagnol can lagòt, meaning “water dog”. Its traditional function is a gun dog, specifically a water retriever; however, it is often used to hunt for truffles. 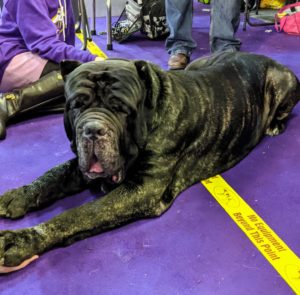 This massive breed is a Neopolitan Mastiff – often used as a guard dog because of its large size and protective instincts. Wary with strangers, the wrinkled “Neo” is sweet, placid, and very affectionate among loved ones. 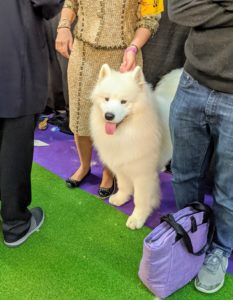 The Working Group Samoyed has a thick, white, double-layer coat. They are powerful, tireless, and known to “smile.” The upturned corners of the mouth actually serve a purpose – they keep “Sammies” from drooling, preventing icicles from forming on the face. 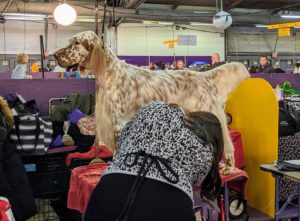 The English Setter is a medium-size breed of dog. It is part of the setter group, which includes the red Irish Setters, Irish Red and White Setters, and black-and-tan Gordon Setters. The mainly white body coat is of medium length with long silky fringes on the back of the legs, under the belly and on the tail. 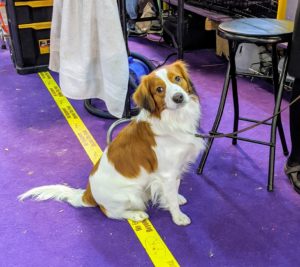 The Nederlandse Kooikerhondje is a small spaniel-type breed of Dutch ancestry that was originally used as a working dog, particularly to lure ducks. “Kooikers” were popular in the 17th and 18th centuries and appeared in the paintings of Rembrandt and Jan Steen. The breed is lively, agile, self-confident, good-natured and alert. 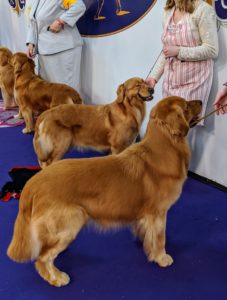 I am sure you are familiar with this breed – the Golden Retriever – the exuberant Scottish gun dog stands among America’s most popular dog breeds. They are serious workers at hunting and field work, as guides for the blind, and in search-and-rescue. They excel at obedience and other competitive events and have an endearing love of life when not at work. 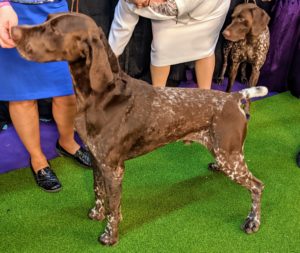 Another sporting dog is the handsome German Shorthaired pointer. The versatile, medium-sized German Shorthaired Pointer is an enthusiastic gun dog of all trades who thrives on vigorous exercise, positive training, and a lot of love. 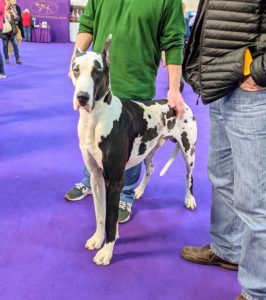 As tall as 32-inches at the shoulder, Great Danes tower over most other dogs. The coat comes in different colors and patterns, perhaps the best-known being the black-and-white patchwork pattern known as “harlequin.” 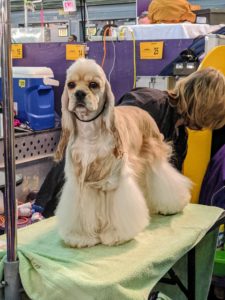 The Cocker is the American Kennel Club’s smallest sporting spaniel, standing about 14 to 15 inches tall at the shoulder. The coat comes in several colors and patterns – this one is buff-colored and considered part of the A.S.C.O.B. variety meaning any solid color other than black. 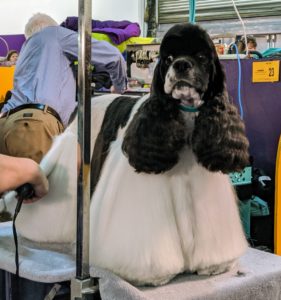 This variety is called the parti-color. A Cocker in full coat needs extra grooming time to maintain their coats, but they are also energetic sporting dogs and love playing and going out for brisk walks. 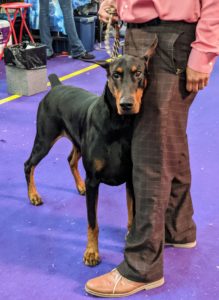 The Doberman Pinscher is a medium-large breed that was originally developed around 1890 by Karl Friedrich Louis Dobermann, a tax collector from Germany. The Doberman has a long muzzle, stands on its pads and is muscular, fast, and powerful. Full-grown, a Doberman stands between 24 to 28 inches at the shoulder. 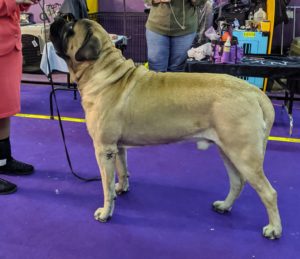 The colossal Mastiff belongs to a canine clan as ancient as civilization itself. The rectangular body is deep and thickly muscled, covered by a short double coat of fawn, apricot, or brindle stripes. 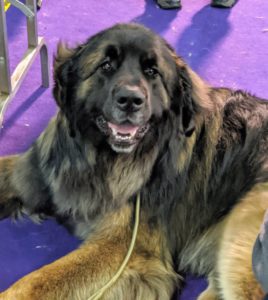 The Leonberger is a giant dog breed, whose name derives from the city of Leonberg in Baden-Württemberg, Germany. It has a medium-long waterproof coat, lush triangular ears, a bushy tail, and a black face-mask that frames its dark-brown eyes. 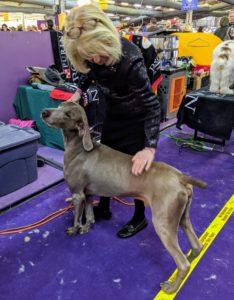 Instantly recognized by a distinctive silvery-gray coat, Weimaraners stand anywhere from 23 to 27 inches at the shoulder. The Weimaraner, Germany’s sleek and swift “Gray Ghost,” is beloved by hunters and pet owners alike for their friendliness, obedience, and beauty. 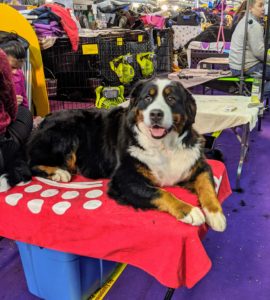 The Bernese Mountain Dog is one of the four breeds of Sennenhund-type dogs from the Swiss Alps. Bred from crosses of Mastiffs and guard-type breeds, Bernese Mountain Dogs were brought to Switzerland by the Romans 2000 years ago. The thick, silky, and moderately long coat is tricolored: jet black, clear white, and rust. 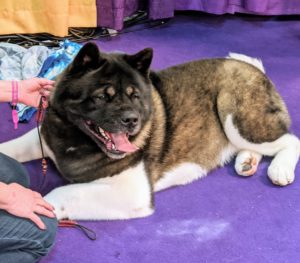 The Akita is a large breed originating from the mountainous regions of northern Japan. In their native land, they are venerated as family protectors and symbols of good health, happiness, and long life. Akitas have a dense coat that comes in several colors, including white. 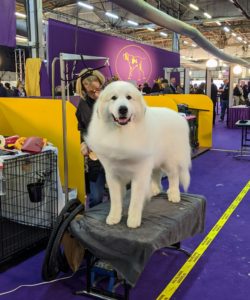 And this is the Great Pyrenees. Known as the Pyrenean Mountain Dog outside of North America, this is a large breed of dog used as a livestock guardian dog. 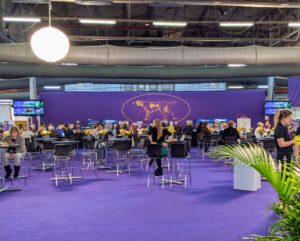 If you’re ever in New York City this time of year, be sure to check out the Westminster Kennel Club Dog Show – it is informational and so much fun for the entire family. 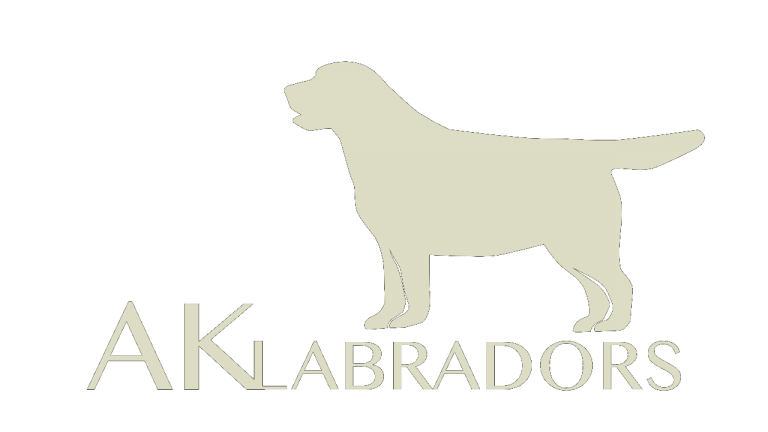